You have no items in your shopping cart.

You have no items in your quote.

You have no items to compare.

You have no items in your shopping cart.

You have no items in your quote.

DALE - A History of Lifting Equipment in Manchester

Product was successfully added to your shopping cart. 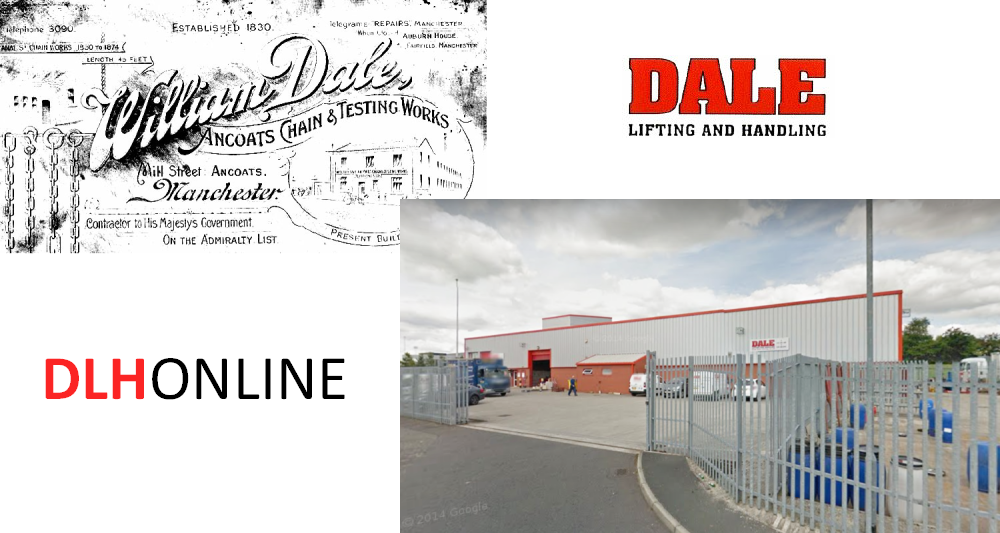 1830 – The Liverpool and Manchester railway was opened.

The prime minister Arthur Wellesley, Duke of Wellington, rode on one of the eight inaugural trains, as did many other dignitaries and notable figures of the day.

Huge crowds lined the track at Liverpool to watch the trains, including George Stephenson’s famous Rocket, depart for Manchester.

The need for good lifting equipment had already begun to be recognised.  And, in that same year a young chain-smith by the name of William Dale, from the Black Country, took the opportunity to set up a chain repairing workshop in Vesta Street, Manchester. His business thrived and he soon moved into manufacturing at his new 45 foot long Canal Chain Works, again in Vesta Street. 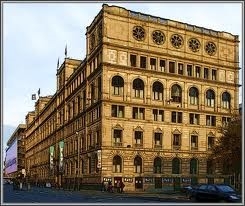 1853 – By the end of the year Manchester was declared a city and within the decade the city was showing off its wealth courtesy of the cotton industry with the opening of Watt’ warehouse (Left), the grandest cotton warehouse yet erected. It is now the Britannia Hotel on Portland Street

1861 -The outbreak of the American Civil War saw an immediate shortage of cotton and the ensuing cotton famine brought enormous distress to the Manchester area until the war ended in 1865.

1874 – Dale’s expanding business meant a further move to larger premises at Mill Street in Ancoats, from where they were awarded chain making contractors to His Majesty’s Government on the Admiralty List.

The new building was proudly declared to be: 171 feet long by 48 feet wide.

The copperplate letterhead (below) shows that Dale’s were makers of all types of chains including Lashing chains for collieries.  Buckling and Sling chains for engineers. 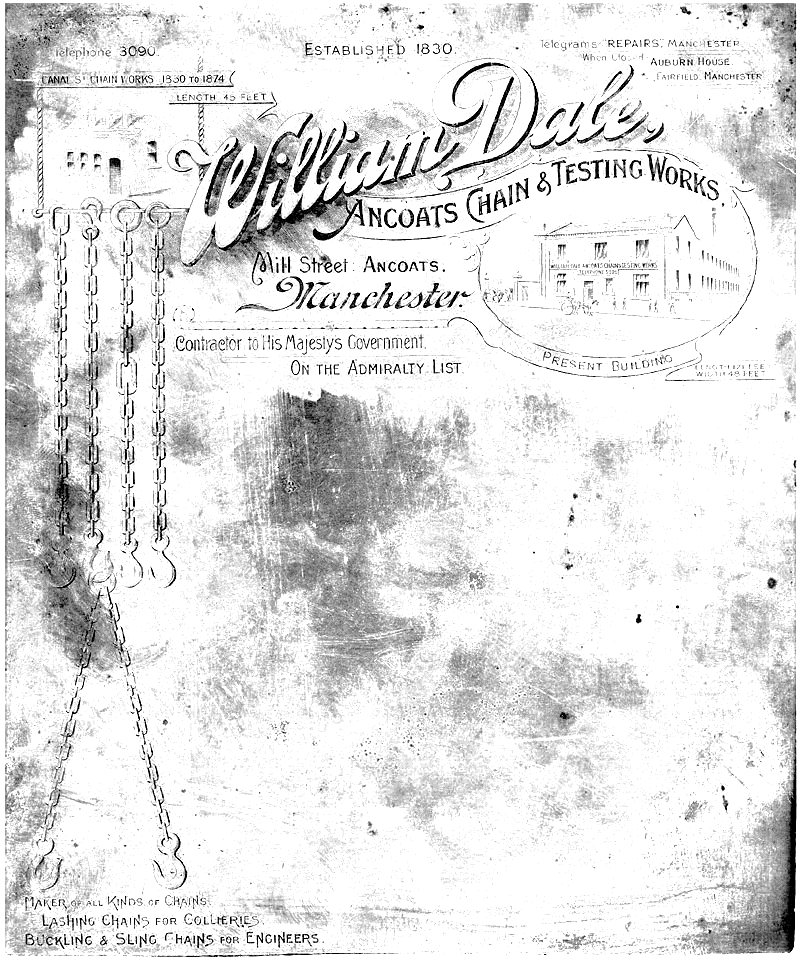 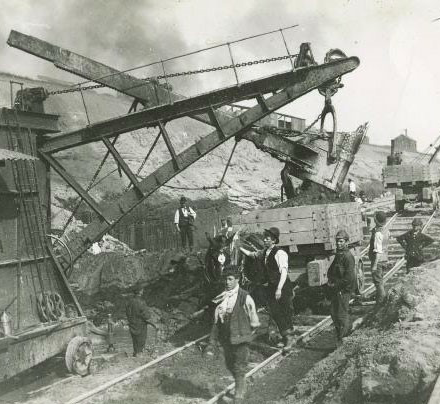 1884 - Championed by local industrialist Daniel Adamson, the Manchester Ship Canal was built. It gave the city direct access to the sea allowing it to export its manufactured goods directly. This meant that it no longer had to rely on the railways and Liverpool's ports.

When completed it allowed Manchester to become Britain's third busiest port, despite being 40 miles (64 km) inland.

The Manchester Ship Canal was created by canalising the Rivers Irwell and Mersey for 36 miles (58 km) from Salford to the Mersey estuary at the port of Liverpool. This enabled ocean-going ships to sail right into the Port of Manchester Docks (technically in Salford).

The Salford docks functioned until the 1970s.

Trafford Park in Stretford (outside the city boundaries) was the world's first industrial estate and still exists today, although with a significant tourist and recreational presence. 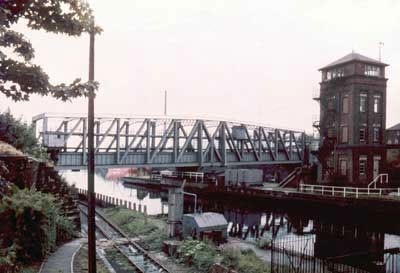 Sir Edward Leader Williams designed the swing aqueduct and it holds 800 tons of water and has a gross weight of 1,450 tons. It is swung, full of water, to allow the passage of boats along the Manchester Ship Canal.

Because it is swung full of water, it is sealed at both ends with hydraulically operated gates and the ends of the Bridgewater Canal are sealed in a similar manner.

1900 onwards – Although little is recorded about Dale’s activities during the late 1800s and the early part of the 20th century. Dale’s customer's list reads like a Who’s who of Manchester’s finest companies who made Manchester the world-class city it is today. 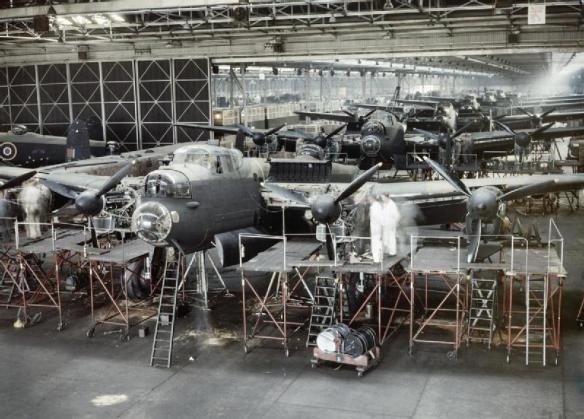 1940 – The wartime blitz of the city tested Mancunian resolve with huge areas of the city wiped out.  But, they were to have a big hand in the fight back as the Avro plant in Chadderton (Later BAE). Also, a Dale’s customer, was building the mighty Lancaster bomber.

The Avro Lancaster is a British four-engined Second World War heavy bomber designed and built by Avro for the Royal Air Force (RAF).

It first saw active service with RAF Bomber Command in 1942 and, as the strategic bombing offensive over Europe gathered momentum, it became the main heavy bomber used by the RAF, the RCAF, and squadrons from other Commonwealth and European countries serving within the RAF.

The "Lanc", as it was affectionately known, thus became the most famous and most successful of the Second World War night bombers, "delivering 608,612 long tons of bombs in 156,000 sorties

1944 – Dale’s Lifting and handling products have evolved to meet the needs of UK industry.  They became early members of the Chain Testers' Association of Great Britain.

The association was formed by competing firms within the lifting equipment industry to improve quality and consistency within the industry.

Now renamed the ‘Lifting Equipment Engineers Association’ (LEEA). Its name was changed in 1988 to more accurately reflect the activities of its now worldwide Membership.  On 1st January 2000, LEEA became a company limited by guarantee and is owned and financed by Members. 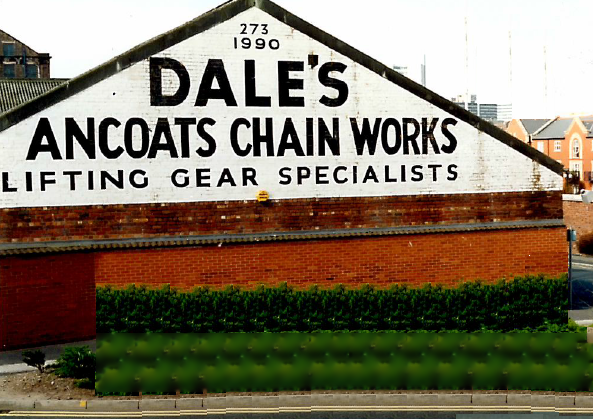 1948 – Dale’s chain business had established a tradition for good craftsmanship and customer service that had been passed down through the generations to the Whitehead family.

This year saw the business move to premises in Chapeltown Street, where the Dales sign overlooking Great Ancoats Street became a familiar landmark.

1988 – In the order to consolidate their reputation for quality and enhance customer confidence and improve competitiveness Dale’s installed computer-aided design (CAD).

This innovation leads to Dale’s becoming the first firm in the North West of England to achieve BS 5750 Quality Assurance part 2 in the provision of lifting equipment and services.

1998 - Dale achieved ISO 9001 for the manufacture, testing and repair of Lifting and Handling Equipment including Mezzanine Pallet gates.

2004 - After 10 years of anticipation Dale's moved to their new works in Clayton. the 1.0-acre site is home to Dale's head office and main works facility with state-of-the-art test machine, assembly, repairs and manufacturing areas. The Greater Manchester Passenger Transport Authority provided the move to make room at the previous Ancoats site for the Manchester tramway system. 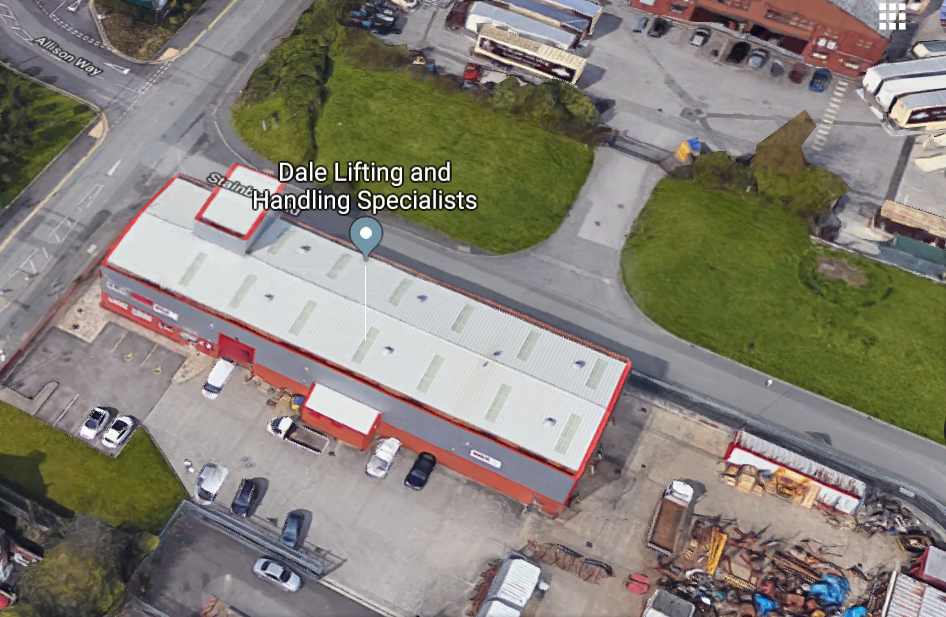 2014 - Manchester City opened their City Football Academy. The team entrance on Allison Way is opposite Dale's office in Clayton Lane.